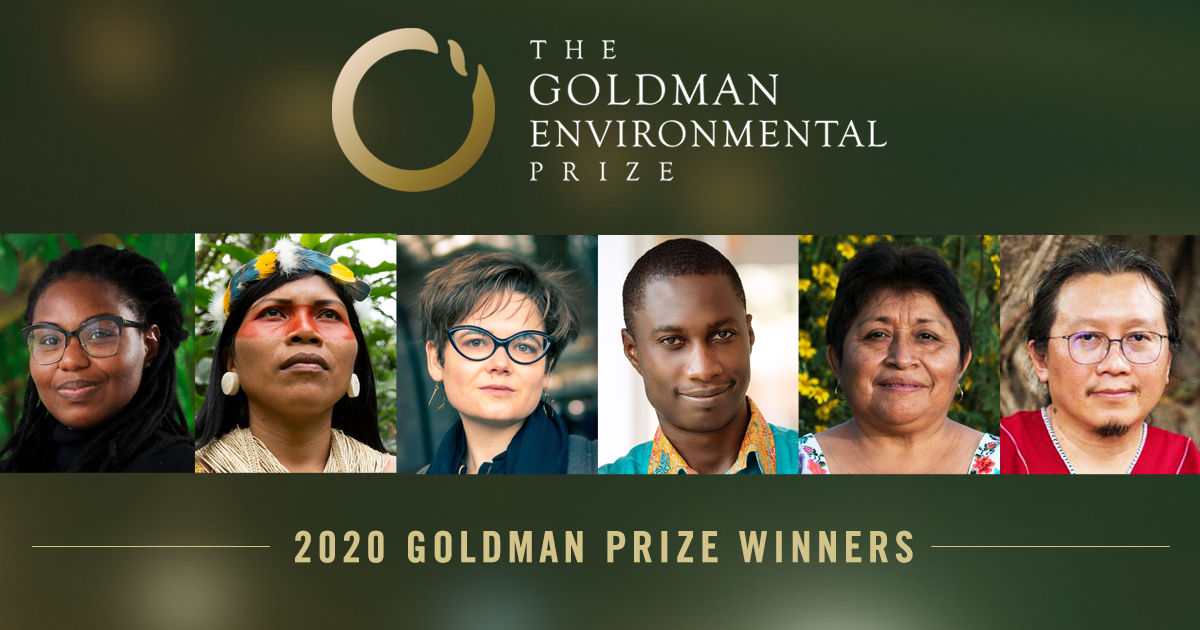 The Earthshot Prize’s nominators have been selected for their ability to identify the most impactful solutions to the five Earthshot challenges across all countries and sectors, from grassroots to businesses. Spanning the globe, nominators include our Global Alliance, a network of global organisations committed to environmental action who share the ambition of the Prize to repair the planet, as well as academic and non-profit institutions and private sector alliances from around the world. Our Global Alliance and nominators are a key part of Earthshot, and as such, their news is great news for the environment and something we look forward to sharing on a regular basis.

Awarded annually to environmental heroes from each of the world’s six inhabited continental regions, the Goldman Environmental Prize honours the achievements and leadership of grassroots environmental activists from around the world, inspiring all of us to take action to protect our planet.

The Prize was founded in 1989 in San Francisco by philanthropists and civic leaders Rhoda and Richard Goldman. As Richard Goldman once noted, “We’d like to leave the world a little better than we found it.” In 31 years, the Prize has had an immeasurable impact on the planet. To date, the Prize has honoured 200 winners (including 87 women) from 90 nations, and has shined a light on many of the critical issues facing the Earth.

Normally, the winners are awarded the Prize in-person at a ceremony at the San Francisco Opera House in April, but this year, in light of the coronavirus pandemic, the Prize was awarded virtually and shared online on November 30, 2020. Not coincidentally, that date also marks the 10th anniversary of the death of Richard Goldman—on November 29, 2010.

This year’s winners are:

CHIBEZE EZEKIEL, Ghana
As a direct result of Chibeze Ezekiel’s four-year grassroots campaign, the Ghanaian Minister of Environment canceled the construction of a 700-megawatt (MW) coal power plant and adjoining shipping port to import coal. The coal power plant would have been Ghana’s first. Ezekiel’s activism stopped the coal industry from entering Ghana and steered the nation’s energy future away from coal.

KRISTAL AMBROSE, The Bahamas
Drawing on the power of youth activism, Kristal Ambrose convinced the government of The Bahamas to ban single-use plastic bags, plastic cutlery, straws, and Styrofoam containers and cups. Announced in April 2018, the nationwide ban went into effect in January 2020.

NEMONTE NENQUIMO, Ecuador
Nemonte Nenquimo led an indigenous campaign and legal action that resulted in a court ruling protecting 500,000 acres of Amazonian rainforest and Waorani territory from oil extraction. Nenquimo’s leadership and the lawsuit set a legal precedent for indigenous rights in Ecuador, and other tribes are following in her footsteps to protect additional tracts of rainforest from oil extraction.

PAUL SEIN TWA, Myanmar
Seeking to preserve both the environment and Karen culture in Myanmar, in December 2018 Paul Sein Twa led his people in establishing a 1.35-million-acre peace park—a unique and collaborative community-based approach to conservation—in the Salween River basin. The Salween River basin is a major biodiversity zone and home to the indigenous Karen people, who have long sought self-determination and stewardship over their land. The new park represents a major victory for peace and conservation in Myanmar.

Learn more about The Goldman Prize and this year’s winners