Healthy Seas: a journey from waste to wear 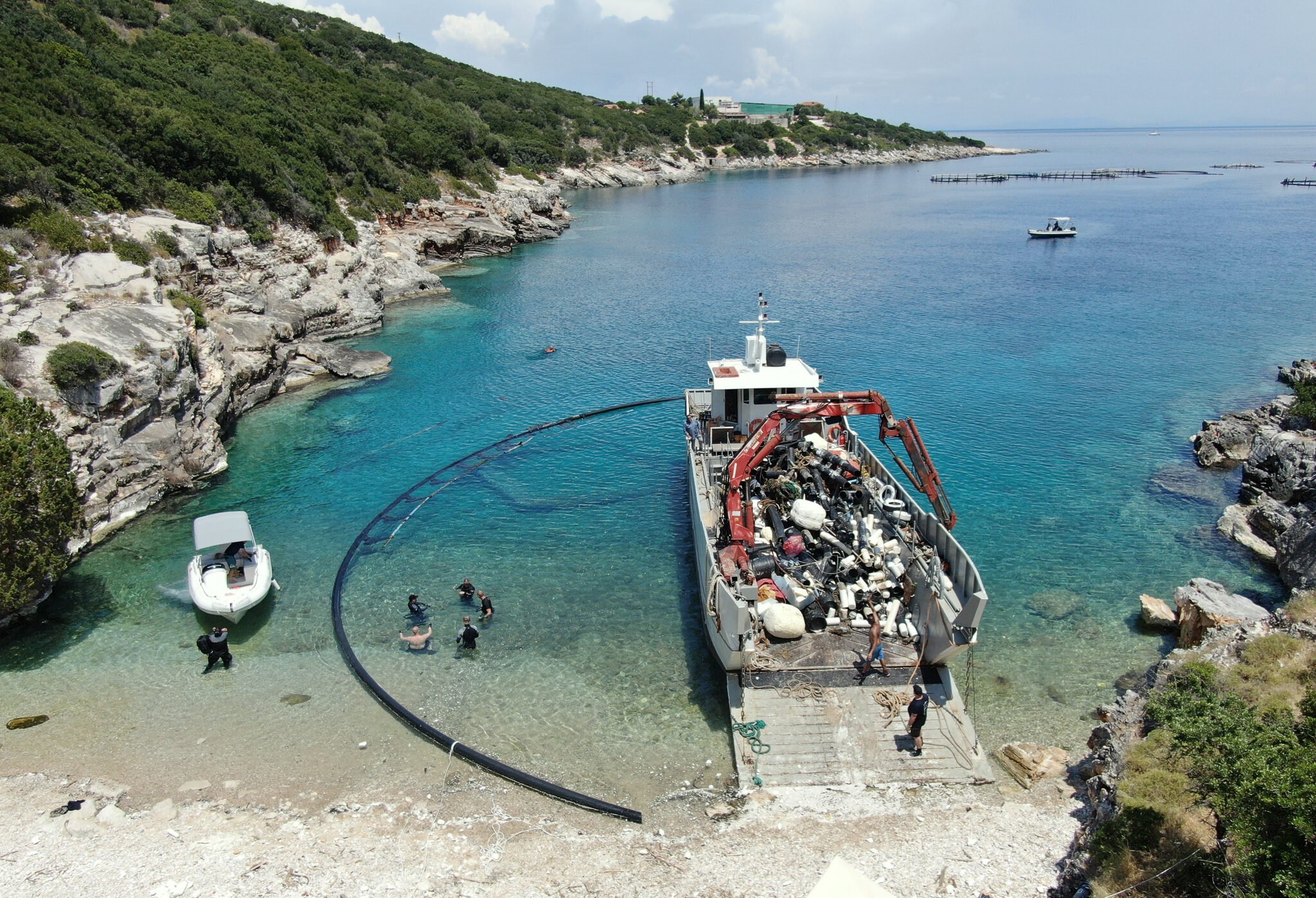 Our Global Alliance is a network of global organisations committed to environmental action who share the ambition of the Prize to repair the planet, as well as academic and non-profit institutions and private sector alliances from around the world. Our Global Alliance and Nominators are a key part of The Earthshot Prize and we’re proud to share and promote their work.

This week, Prize Nominator Healthy Seas talks about how fishing is having an impact on the health of our oceans.

Six hundred and forty thousand (640,000) tons of fishing gear is left or abandoned in the seas and oceans each year. They are called “ghost nets” because they appear almost invisible underwater, killing millions of marine animals.

Healthy Seas was founded in 2013 to tackle the “ghost fishing” phenomenon, one of the biggest marine pollution problems of our time. Through cleanups with over 200 volunteer divers worldwide and by working with stakeholders of the fishing sector toward marine litter prevention, Healthy Seas has collected over 585 tons of waste nets and ensured they become a valuable resource. The Healthy Seas approach contributes toward a solution to ocean pollution, now and for the future. Regular sea cleanups are organised all year round in various European countries (North, Adriatic and Mediterranean Seas), in New Zealand and in Egypt (Red Sea) working closely with the Ghost Diving organisation of volunteer technical divers. 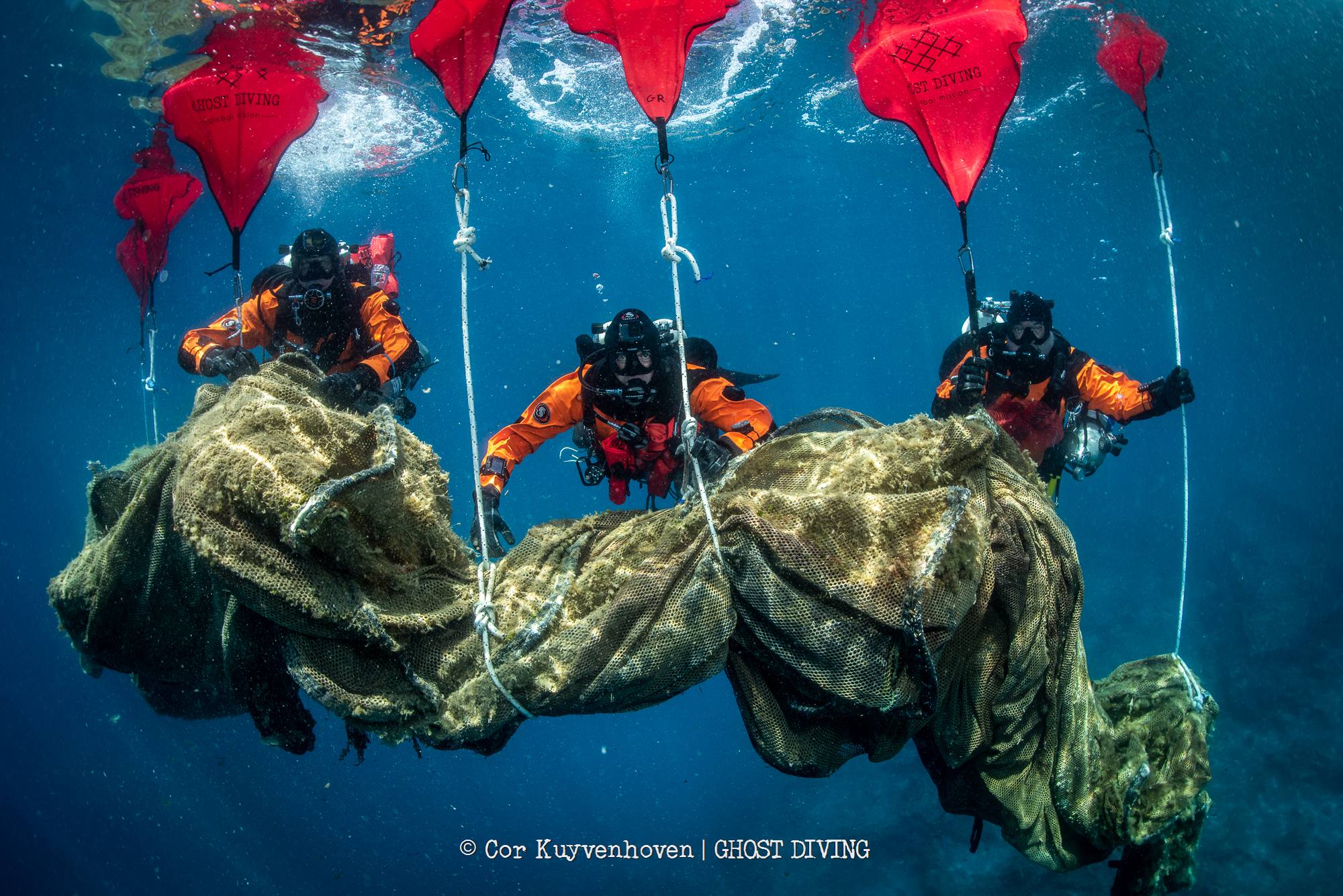 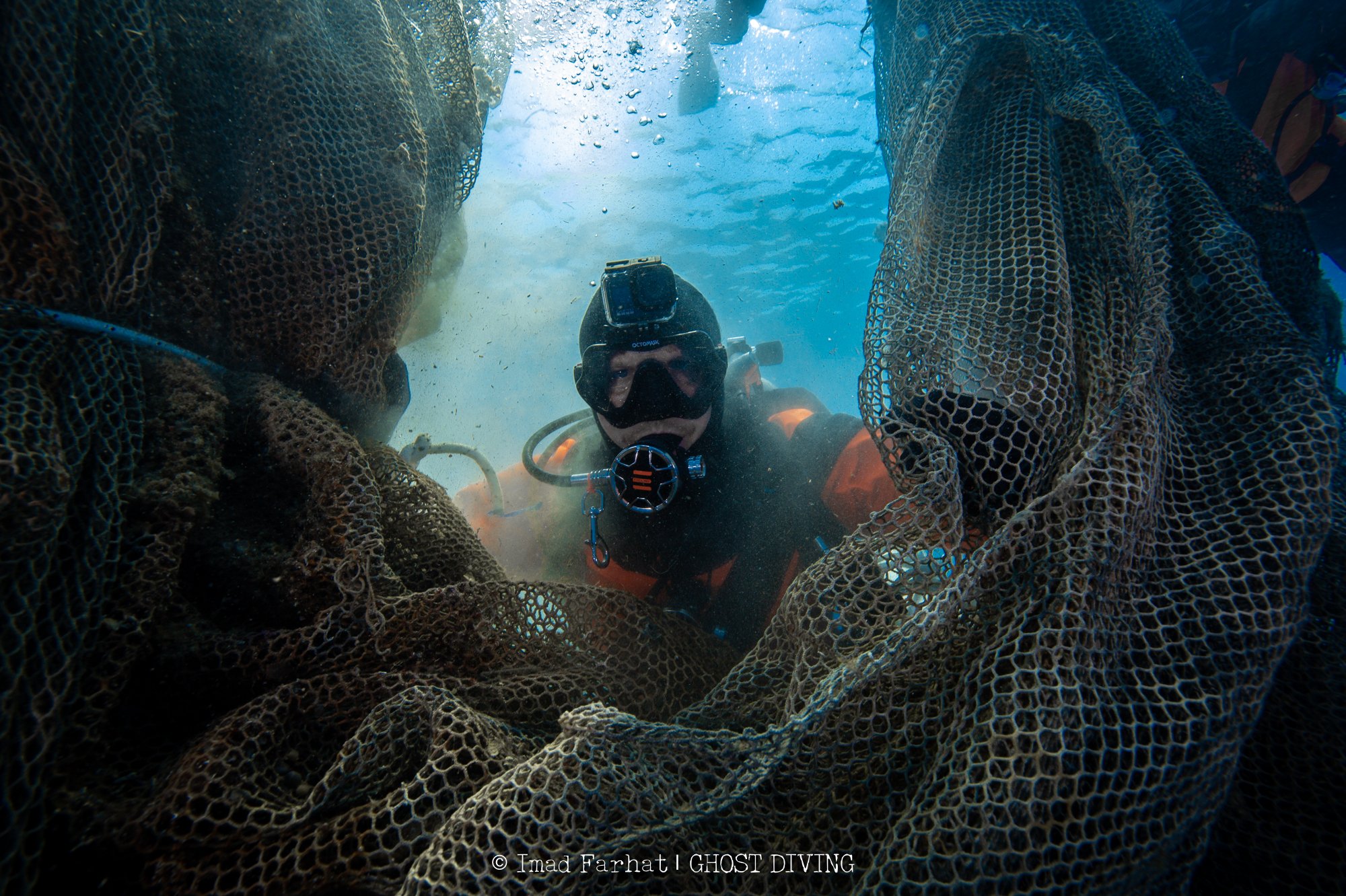 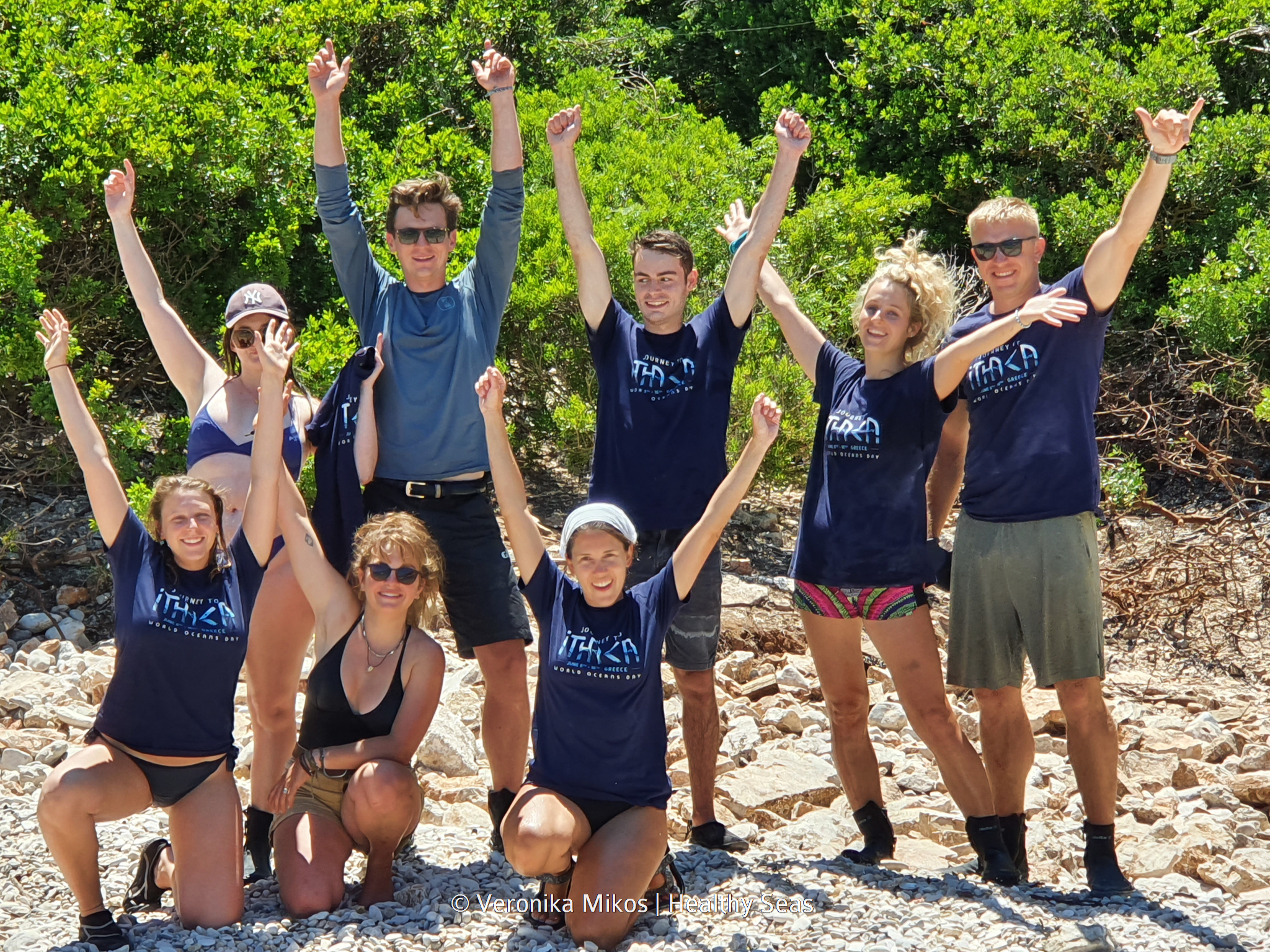 After George Lilas, a local diver and passionate environmentalist, publicised photos of an abandoned fish farm wreaking environmental havoc on Ithaca island in Greece, marine conservation organisation Healthy Seas mobilized all its forces, together with partners Ghost Diving and Enaleia, engaging volunteers, local authorities and sponsors that wanted to help restore the pristine beauty of the area. The project was kicked off on June 8th 2021, World Oceans Day, lasting until June 16th. It is worth mentioning that this was the biggest project in the history of the above organisations in terms of positive environmental impact and community involvement, delivering astounding results in a short amount of time.

In just over a week, a team of 45, mostly volunteers including 20 divers, undertook an unprecedented cleanup removing 76 tons of debris from the sea, coastline, and 4 beaches on the Southwest of Ithaca, the island that is famous for being the home of King Odysseus and a universal symbol of home yearning.

The company that had gone bankrupt in 2012 had left behind fish farm cages and other equipment that polluted the area endangering the local community, marine life as well as maritime traffic. In September 2020, Ianos, a rare hurricane-like storm caused the tons of industrial type of plastic pipes, fishing nets, nylon ropes, concrete blocks, plastic buoys, large rusty metal pieces and all kinds of waste to be carried away, later to be found floating on the surface of the sea, laying on the seabed and on the beaches.

For 8 days, 14 international volunteer technical divers from Ghost Diving worked to get rid of the rings, pipes and fishing nets while another team of surface volunteers tackled the beaches, some of which were knee deep in foam pellets that had through the years spilled out of the floats.

Local divers from Greece provided support to the cleanup operations, lifting smaller items from the seabed.  Heavy metal structures that were found on the seabed were removed by commercial divers and a working barge. Overall, the team recovered 5 tons of fishing nets, 32 tons of metal, 39 tons of plastic, including 150 bags full of polystyrene foam beads.

A prime example of sustainability at work

One of the 3 founding partners of Healthy Seas, Italian company Aquafil1 , will regenerate the recovered nylon fishing nets together with other nylon waste into ECONYL® yarn, the basis for new sustainable products such as socks, swimwear, carpets and more.  In the framework of Enaleia’s Mediterranean Cleanup Project, the rest of the collected debris will also be integrated into the circular economy.

Since 2013, over 90 sustainable businesses have partnered with Healthy Seas, by taking action and helping to fund sea cleanups, prevention and education activities. For Healthy Seas, collaboration is they key in order to move from problem to solution. However, in order for our way of life to truly become sustainable, legislation, education and eco -design are needed. Together with its partners, Healthy Seas advocates for clean seas and sustainability by showcasing its circular economy model. On September 22nd, 2019, the “Circular Economy Award” was bestowed on Healthy Seas at the Green Carpet Fashion Awards during Milan Fashion Week. The organisation is a best practice example for the circular economy, highlighting that waste is too valuable to be wasted. 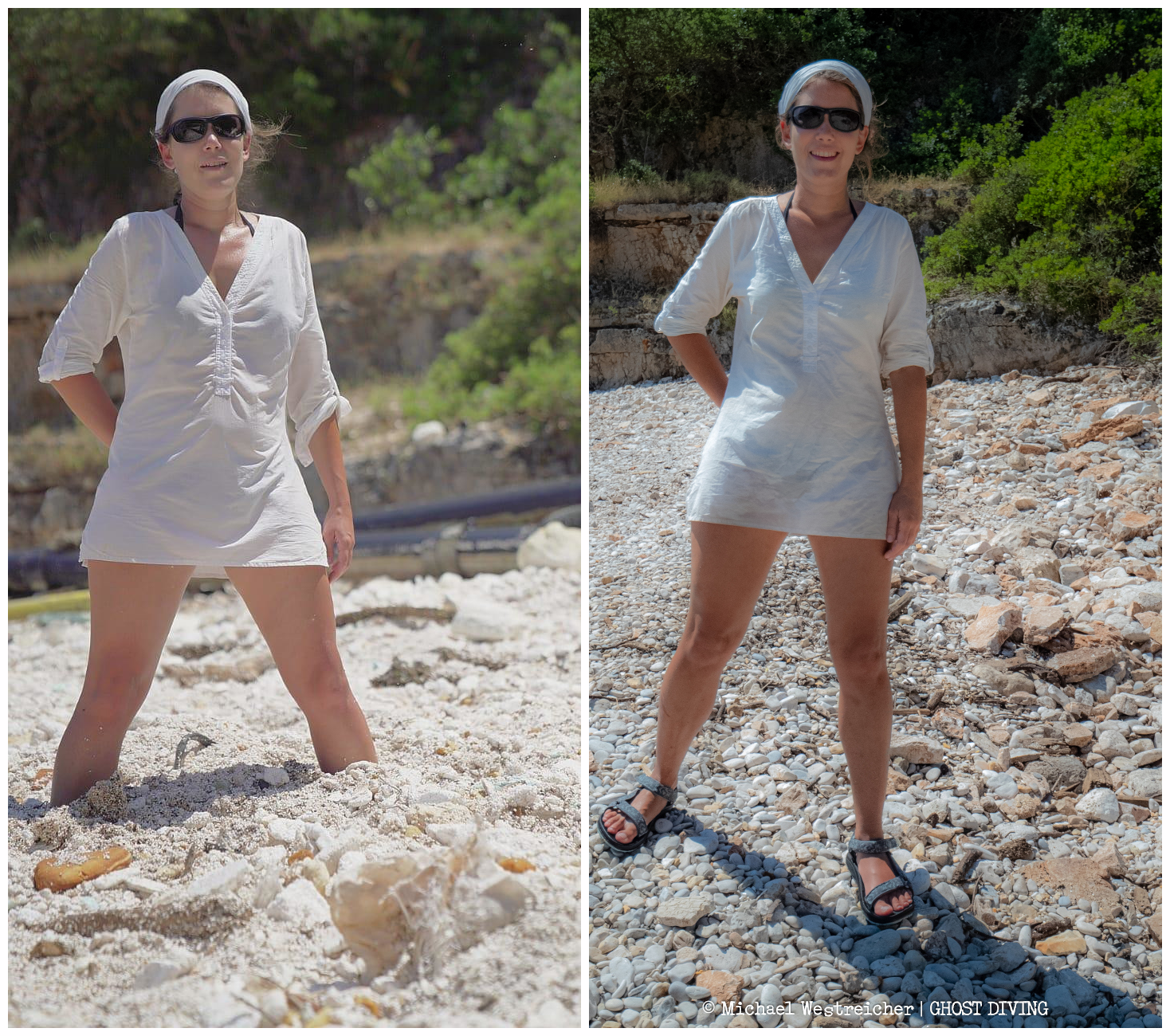 Healthy Seas champions the three pillars of sustainability and strives to make a positive and long-lasting impact to the marine environment, through education and awareness-raising. Education is key when it comes to creating a sustainable and healthy future and that is why Healthy Seas focuses on teaching children and also adults about the devastating effects of ghost nets to the marine environment and biodiversity.

In Ithaca, Healthy Seas organised a public event at the main square, inviting local children to take part in fun educational activities including arts and crafts and a state-of-the-art Virtual Reality Experience through which they became environmental divers.

The organisation’s outreach activities also focus on educating about responsible and sustainable product alternatives to many fashion and interior purchases. Their aim for the future is to reach more kids in Europe and beyond so they can become ambassadors for healthy seas.

Cooperation with fishers for the prevention of ghost nets

Healthy Seas works with fishing communities to collect their waste nets before they end up in a landfill or even worse, the natural environment. At the same time it fosters a link between divers and fishers in the countries where it operates helping to mitigate the ghost fishing phenomenon for the well-being of local communities and the marine environment.